Concert of the Muse 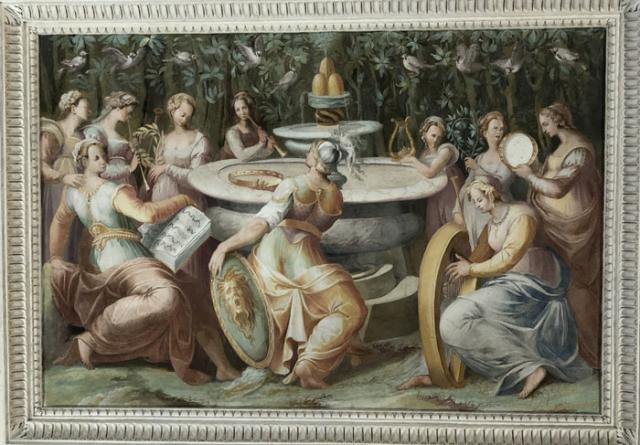 The internal rooms of the Corgna palace in Città della Pieve, like the monumental stairways, are frescoed decorations with grotesques and large panels with a mythological and sacred nature, according to a typical representative scheme of the Roman 16th century. Among the most important halls is the Governor’s Hall on the ground floor, it houses the cycle of frescoes by the Mannerist painter Nicolò Circignani known as “The Pomarancio” depicted in the “Concerto” the glorification of the Della Corgna - del Monte families, which became a marquisate in 1563. Niccolò Circignani, known as Pomarancio after his birthplace in a locality of Pisa, studied decorative painting following the example of Federico Zuccari. He met with little success in Rome so he turned his attention to provincial clients: he worked in the Duomo of Orvieto, the Mongiovino sanctuary, in Umbertide and Città di Castello. Back in Rome in the 1780s, he worked in the Meridian Hall in the Vatican and for the Jesuits of St. Thomas of Canterbury.